Rent a car in Santander 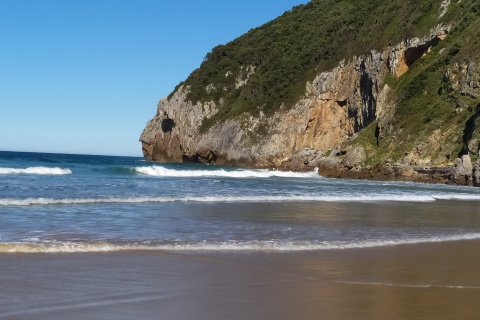 Hire a car to visit this sunny little nice town by the sea, in the north of Spanish coast, with very tasty local food and good fiesta in the weekends.

Rent a car in Aeropuerto Santander, so you cannot miss a thing during your time here. Make the most of your visit in a very interesting car route in Cantabria. And do not miss the Park of Cabarceno by car, because it is one of the biggest and more beautiful zoos in Spain.

The landscape is so similar to Britain´s, even its Victorian city old style. Santander suffered great damage due to the great fire of 1941, but the town was soon rebuilt as a modern art deco beautiful resort. There are some nice places you must visit here, as the Hotel Real, situated in the best spot of the town, with lovely landscape around. You can see the whole Bay from here, and the art deco building itself is amazing. Close to it, the Palacio de la Magdalena is in the center of a superb park surrounded by the sea. It even has a little zoo inside, with some penguins and sea lions.

The beaches of Santander are so nice, the whole city is built besides the sea, so it takes a long time to finish the coastal walk through La Magdalena, El Sardinero and Mataleñas, where the city ends in an impressive lighthouse over the Bay entrance. Santander has countless bars and restaurants of tapas, cocktails and fiesta till late hours. The Cathedral is very interesting too, because of its past as roman baths and medieval fortress, which protected the town against pirates raids since the ancient times.

It could be of your interest that Santander suffered, in 1893, the worst not military catastrophe in the History of the country, when a boat full of dynamite got fire close to the docks. The captain was so dumb that he allowed the ship to be helped by other boats and the docks fire systems, in the port, while a big crowd of people came close to see the flames. That was a bad move, too, because the ship exploded then, like a little atomic bomb, which sent shockwaves and iron fragments all across the Bay.

Nearly all of those sailors and innocent civilians, including this irresponsible captain, died in the spot. Also, a big fire started (before the other famous one, in 1941), and destroyed most of the buildings by the sea. The fire lasted for some days and the town lost as many as 600 deaths. This infortunated ship was built in Newcastle, England, just ten years before the accident. Only a few days after this black day, again, another explosion occurred, when the remains of the boat were being removed, killing other 15 men.

It is good to know that we can visit the whole town in a good day of walking by the sea, but we will need to hire a car in Cantabria. There are some things around Santander that we should not miss. To visit Santillana del Mar by car, for example. This is one of these very interesting things, maybe the best, as it has been voted many times as the most beautiful village in Spain. A very old place from the times of The Reconquista, this famous eight centuries war between Spanish Christians and Muslims.

We can see here the same tiny medieval streets as in Toledo, for example, and it is so close to Comillas: another old and stylish village by the sea. In this case, with very impressive palaces and El Capricho de Gaudí. You cannot miss these things if you are around here, but it is very important to rent a car in Cantabria if you want to get to these places. Otherwise, it is so difficult to arrive to them all.

The region is so famous because of its beaches and historical background. Also, the caves of Cantabria are superb and very well known, and studied by British, USA and many other foreign countries colleges. To visit the cave of Altamira by car you can hire a car in Torrelavega, which is close to this prehistoric museum. And then you can continue your visit though Santillana del Mar, Comillas and San Vicente de la Barquera, a very nice medieval village with a citadel and a castle. All these places have plenty of cultural and natural charm.

Other places to visit in Cantabria by car

There are other important routes. We can take the way to El Soplao by car, and then visit beautiful old villages as Los Tojos, Carmona or Barcena Mayor. Then, we can choose other route for another whole day and go South, to visit the roman remains of Juliobriga and Camesa Rebolledo. They are very close to Fontibre, where the biggest river in the Iberian Peninsula starts. And we can visit the Castillo de Argueso by car, too, as there are many isolated places around that we can only visit this way. There are still other Cantabrian tours, like the Valles Pasiegos by car, or the coastal way to Bilbao, across the nice and also old towns of Laredo, Santoña and Castro Urdiales. We can rent a car in Laredo to visit all these places properly, because otherwise it will be difficult to know so many places during the visit.

We hope all these tips are of your interest and may help you. If you have any doubt, do not hesitate to ask in our rent a car office in Santander, Torrelavega and Laredo.